Thursday, August 6, 2020 By: Christie Bruffy
The noon meeting opened with our new president, Jim Miller, acknowledging the first meeting of our club's 45th year. Following an invocation by Shirley Lambert and the Pledge of Allegiance, Alan Grossman introduced a guest, Dennis Lee, Director of Business Development for Century Global Technologies. Dennis recently moved to the area and decided to check out the club after finding us on the internet as he is interested in helping people.

Alan then paid tribute to our friend and fellow rotarian, Bill Shantz, who passed recently after being diagnosed with melanoma cancer. Sergeant Steve Payerle then shared a beautiful photo presentation of our memories with Bill. Alan announced plans for a memorial to be held on Wednesday, July 29th at 3:00 pm at the Westerville Bible Church. Masks will be required, and proper social distancing will be followed. 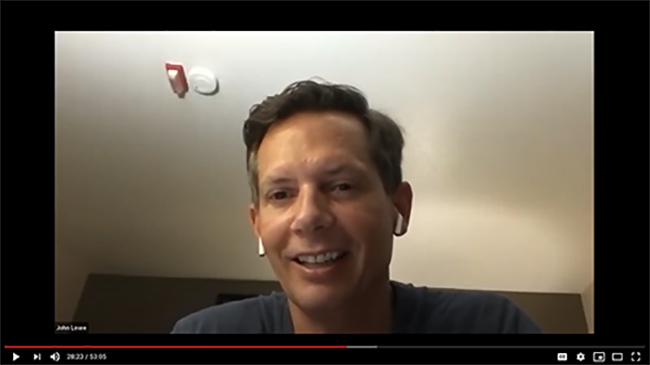 John led us through his journey that began as a friendship with Jeni Britton Bauer, founder and Chief Creative Officer of Jeni's. This relationship led to the offer of CEO, a new but much-needed position, where he has been able to grow the company from 4 local scoop shops to over 40 nationwide in his 10 years. He has faced many ups and downs during that time, both professionally and personally, including the listeria outbreak in 2015, and now the pandemic. Through complete transparency and the faith of financial backers, Jeni's has been able to retain the trust and support of its loyal customers through it all. As they currently face decreased sales in their brick and mortar stores, resulting in furloughs and pay cuts, their e-commerce and wholesale business are strong, making survival possible. John is very optimistic about Jeni's future and can't wait to "get back at it" and continue to grow.

The meeting concluded with the recitation of The Four Way Test.
Share

Thursday, August 6, 2020 By: Christie Bruffy
President Jim Miller called the meeting to order just after noon as some members were engaged in a conversation regarding the Worthington City School District's recently announced plan for the start of school this fall. Bob Hanson gave the invocation and led the Pledge of Allegiance. President-Elect and today's Sergeant, Steve Payerle, then introduced club guest Dennis Lee, who had attended our last virtual meeting as well. Dennis recently moved to the area and is a prospective member.

Joe then introduced his colleague and our speaker, Alicia Shaw, an employment law expert who spoke specifically about employment law in relation to the pandemic. 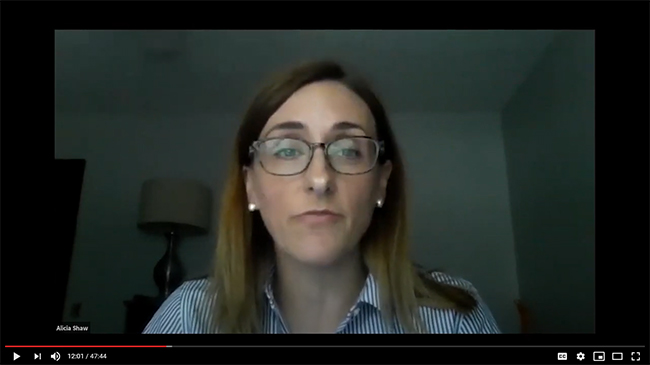 The focus was on business owners and how they can operate safely during this challenging time. The main topics were workplace safety, potential liabilities, and complex employee leave issues. The best way to ensure safety along with decreased risk of liability is to follow the guidelines and procedures set forth by the following:

Alicia then discussed how Workers' Compensation claims could be filed by an employee who contracts the virus while employed if an employer has disregarded or violated safety standards. Paid leave- As of April 1, there are 2 acts that will require employers to provide employees with paid leave for reasons related to the pandemic:

The bottom line is that employers should make sure that they stay on top of all of the policies and recommended procedures to provide their employees with a safe work environment, however challenging that may be.

Steve followed the speaker by leading members through the FOUR WAY TEST.

President Jim Miller reminded us of the return of our normal meeting schedule starting on Wednesday, August 5 at 7:30am. Our speaker will discuss how West Virginia became a state and how this ties in with Black Lives Matter and racial injustice. Jim concluded the meeting by encouraging attendance to Bill Shantz's memorial service next week. He also encouraged members to stay after the meeting to continue with their previous conversations and to socialize- a key component of Rotary.

Thursday, August 6, 2020 By: Christie Bruffy
President Jim Miller welcomed everyone to the first morning meeting of the new Rotary year. There were several members that indicated previously that they preferred the early meetings, so this reflected a return to our original monthly schedule which offered half morning and half afternoon meeting times. Wynn Wiksell gave the invocation and led the Pledge of Allegiance.

President-Elect Steve Payerle then called for any “Happy Dollar” announcements:
President Jim Miller called for any announcements:
Joe then introduced his colleague and friend, Eric Wittenberg, as our speaker. Eric is a lawyer with Cook, Sladoje and Wittenberg, where he heads the business litigation practice.  He also happens to be an award-winning Civil War historian. He has published 22 books on the Civil War as well as over three dozen articles on the subject in national magazine. 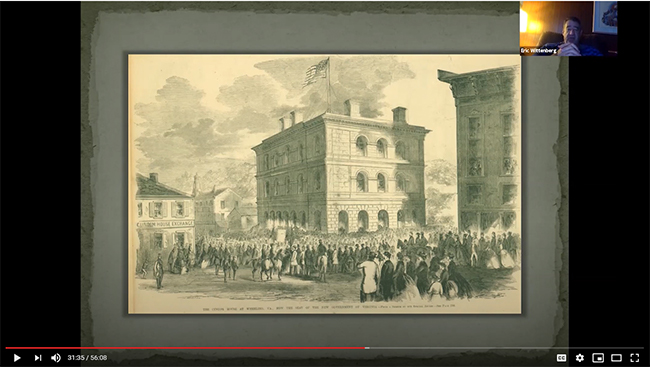 The presentation focused on his newest book, Seceding from Secession: The Civil War, Politics, and the Creation of West Virginia, co-authored by Edmund A. Sargus Jr. and Penny L. Barrick.  In 1863, the northwestern third of the Commonwealth of Virginia broke off to become West Virginia- the Union’s 35th state.  The social, legal, military, and political factors that converged to lead to this separation are chronicled in the book.
Eric is interested in joining our club, so we’ll be sure to “see” him again soon.
President Jim Miller followed the speaker by leading members through the FOUR WAY TEST.
Approximately 20 members remained online after the formal meeting, with about 4 members actively engaging in a discussion on the speaker’s topic.
Jim then asked for ideas on where we can hold our in-person meetings when the time comes.  There is a concern with rental fees and the cost of meals.
He also asked for feedback on how we can improve our virtual meetings. There was a reminder announced of the next session in the District’s Master Class Series will be held on August 11, 2020 from 5:00-6:00pm: Teambuilding During Virtual Times.  Registration is now open for this Zoom session. 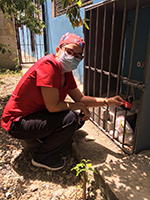 The Dublin-Worthington Rotary Club has been working collaboratively with our Twin Club in Santiago, The Santiago de Los Caballeros Rotary Club, for almost 20 years, in support of the Barrio Lindo Medical/Dental Clinic. The clinic is a government funded first level Primary Care Clinic, serving Barrio Lindo and neighboring Barrios, with a population of approximately 10,000 families.

Government Funding beyond that needed to provide essential staff has been minimal and sporadic. Over the years our two Twin Clubs have served as a source of back-up funding to cover essential services the government was unwilling, unable, or slow in providing. Most notable was a clinic building, now owned by the local Rotary Club for the sole use of the community and the clinic. In total, funding in excess of $100,000 from club funds, private contributions, and both District and RI Grants, have been raised in support of the clinic. 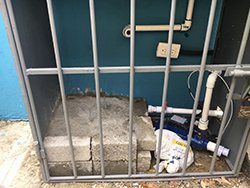 most recent project resulted from a recent draught that hit the DR in the middle of the current Pandemic. It threatened to shut down the clinic at a time when it was critically needed by the community. The city had both reduced the water pressure in the system, and gone to rationing where water was only available on certain days. To assure enough water to stay open, the clinic needed to install an auxiliary pump, and roof top storage tank. The cost of these was $589. The local club had no funds available, but one of their members pledged $175, and asked if our club would pick up the remaining $414. The need was immediate if the clinic was to stay open. International Committee Leadership immediately agreed, further agreeing to take cash on deposit with the Santiago club, previously approved for a video, be so work could begin immediately. 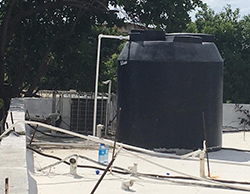 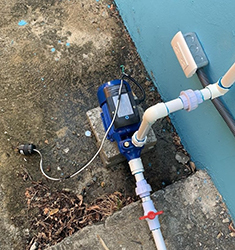